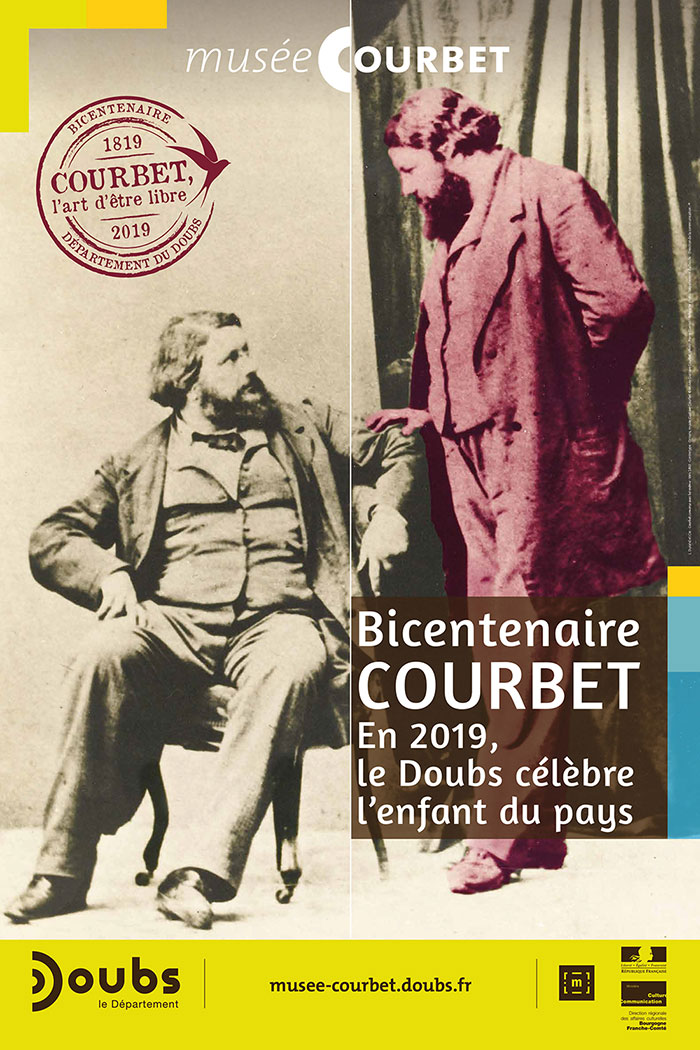 Courbet, the art of being free

Gustave Courbet was a free man, free to paint as he saw fit, free to express his ideas, free as the swallows on his studio ceiling! The Département of Doubs chose this freedom as the common theme when celebrating the 200th anniversary of the Master of Ornans’ birth throughout the region during the whole of 2019. The highlight of the event: The internationally-renowned Franco-Chinese painter Yan Pei-Ming will be in residence in Courbet’s studio in Ornans from March onwards to work on a special summer exhibition.

The swallow, the symbol of this bicentenary

A surprise discovery at Courbet’s studio in Ornans, when it was acquired by the Département of Doubs in 2008… although the artist painted landscapes on the dropped ceiling in his studio, he also added swallows in flight to the ceiling in Ornans. This huge area with its dark walls – to enable him to concentrate on the painting underway – is topped by a clear sky where these birds traditionally associated with the arrival of springtime twirl around, performing their aerial acrobatics. The contrast is particularly striking!

Louise Michel, the muse of the Commune, whose ideals Courbet shared, praised this symbol in one of her poems, which he may have read. She also appears to describe landscapes straight out of the paintings of this master of realism.

And so it was that the swallow became the emblem of the bicentenary to celebrate the birth of this free man.

Doubs celebrates one of its illustrious sons

Throughout 2019, the Département of Doubs will be honouring the artist, the man who was so fond of nature and of his region, the humanist, the Epicurean, the writer and traveller… To do so, a combined project focusing on this bicentenary has been produced involving all the region’s key players, including institutions, experts and promoters of artistic or scientific projects. This national project also has a more local objective, namely sharing these celebrations with local inhabitants in an accessible and festive manner to make this event something that can be enjoyed across the whole département by as many people as possible.

– Courbet dessinateur (Courbet the illustrator)  from 15 February to 29 April : a novel subject as up until now it has not received a great deal of attention. The exhibition at the Musée Courbet will be exploring this little-known aspect of Courbet’s work and will provide an opportunity to discover drawings from private collections.

– Yan Pei-Ming face à Courbet (Yan Pei-Ming and Courbet) from 10 June to 30 September: this exhibition at the Musée Courbet will be comparing the works of Gustave Courbet and Yan Pei-Ming, a leading figure in contemporary painting. This painter of Chinese origin will be in residence from March 2019 in Courbet’s last studio in Ornans, which was recently restored.

– Courbet-Hodler from 31 October 2019 to 5 January 2020: examining the unusual lives of these two artists, this exhibition will illustrate the aesthetic changes underway in European art in the late 19th century. It also provides an opportunity to appreciate the Musée Courbet’s extensive collaborations with the Swiss museums and particularly the Hodler Foundation.

– Courbet autrement (Courbet – An alternative view), 27, 28 and 29 June 2019: this international colloquium is organised by the Département of Doubs and the municipality of Ornans, in cooperation with the University of Franche-Comté. Organised under the patronage of Jean-Luc Marion, a member of the Académie Française, this colloquium will also give young researchers an opportunity to publicise their work providing an alternative view of the artist from Ornans.

And many other events!

– 20 and 21 April: Trail’n Loue will be proposing a trail in honour of Courbet, beginning at the Musée d’Ornans (Ornans Museum)

– From 10 June to 31 December 2019: a travelling exhibition, Les chiens de Courbet, organised by the region’s hunting federation, will be examining the place of dogs in the master of realism’s work

– 17 and 18 August: The organisation of two special bicentenary cycle races. The Vélo-club d’Ornans (Ornans cycle club, which organises the Courbet race each year) and the Departmental cycling committee (which runs the Triangle du Doubs) are joining forces for a sporting weekend with a special Courbet event.

– Archives and landscapes: an exhibition at the Departmental Archives in Besançon on the changing landscape of the Loue Valley, in September 2019

For further details about the event programme:  Agenda

When I’m dead, I want people to say of me:
he never belonged to any regime
other than the regime of freedom.

I am 50 years old and I have always lived free

wrote Gustave Courbet in 1870 to the minister Maurice Richard,
when he refused the Légion d’honneur which Napoleon III wanted to award him.