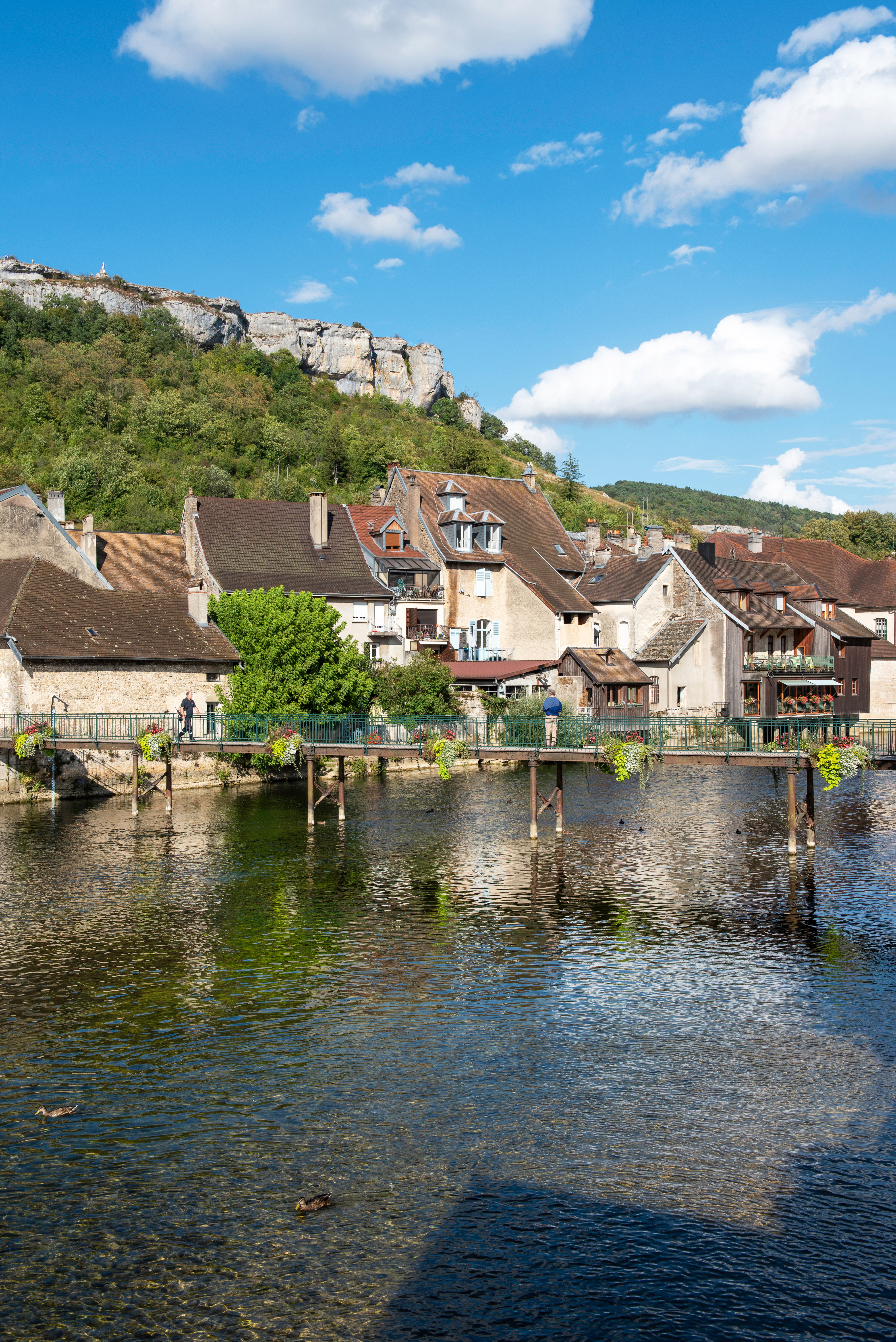 “Pays de Courbet, Pays d’artiste” was born in 2004 as a result of the Doubs Departmental Council’s wish to support the cultural, social and economic development of a region loved and painted by the artist. Its aim was to turn Ornans into the 3rd biggest cultural centre in the Doubs, after Besançon and Arc-and-Senans. The “Pays de Courbet”, or Courbet Country, is now made up of five sites: the Courbet family farm in Flagey, the Gustave Courbet museum in Ornans, the painter’s studio in Ornans, the Source of the Loue site and eight walking trails taking in the great landscapes painted by Courbet.

In 1976, the Doubs Departmental Council bought the Hôtel Hébert in Ornans from the Friends of Gustave Courbet Association. It was here that the painter’s family spent part of its life. The authority then acquired two buildings adjoining the museum: the Hôtel de Champerreux in 1994 and the Maison Borel in 2003. From then on, the “Pays de Courbet, Pays d’artiste” cultural project took shape. The Courbet farm in Flagey and the painter’s last studio in Ornans were bought by the Departmental Council in 2008. Finally, the renovation of the museum by Christine Edeikins’ firm of architects, Atelier 2/3/4, the landscaper Bernard Paulet and the Guliver Design agency, was completed in 2011.

The Gustave Courbet Museum in Ornans

Inaugurated on 1st July 2011, it covers over 1000 m2 and offers a unique view over the Loue, Ornans and its cliffs, particularly through its large glass walls, one of which is suspended over the water.

The permanent collection contains some 400 works (paintings, drawings and sculptures by the artist and a wide range of documents, including photographs and letters). There is also a series of portraits of his family, friends and inhabitants of the Ornans locality, including the Village girl with kid (1860). The animal and hunting themes are also very present in the museum’s paintings, with White Bull and Blond Heifer, painted during the 1850s, and Fox caught in a trap in 1860.

The museum also offers 16 exhibition rooms showing works by artists close to Courbet, letters, drawings, engravings and sculptures, giving a glimpse of the artist’s private world and what his life might have been like in the 19th Century. And, of course, there is one of his most important works: The Flagey Oak, also known as the Vercingetorix Oak, Caesar’s camp near Alesia (1864), which was acquired by popular subscription in 2012.

The Courbet Farm in Flagey

The Courbet family bought the farm in Flagey in the 18th Century. The Bourgon family also lived there. They were tenants* of the Courbet family and farmed the land in exchange for part of the harvest. The house has been restored and developed to offer visitors a complete cultural venue: an exhibition room, where contemporary artists present their work, and a teaching room for group visual arts workshops. In addition, the Café de Juliette and its terrace offer a magnificent view over the garden. In this room, there is a creative area for children with visual arts equipment provided. Finally, there is a bookshop area where visitors can find books about Gustave Courbet.

The painter’s studio in Ornans

This was the last studio in Ornans where Gustave Courbet lived and worked from 1860 until his exile to Switzerland in 1873. The artist himself oversaw the purchase and conversion into a studio of this former foundry in Ornans. It was acquired by the Doubs Departmental Council in 2008 and is listed in the Supplementary Inventory of Historic Monuments.

The Source of the Loue site

Gustave Courbet painted the Source of the Loue many times, which is partly why the site has been listed since 1930 under the regulations governing the protection of natural or built sites of general artistic, historic, scientific, legendary or picturesque interest. Of the buildings that existed in the 19th Century but were destroyed in 1926, there remains only the one that houses the “Maison de la Source”, a reception centre, which shows a film presenting the natural site as it was perceived by Courbet. It is one of the most visited natural sites in the Doubs.

Gustave Courbet, whose realistic artistic approach shook the art world of the mid-19th Century, was one of the first painters to depict painted landscapes for themselves alone and not just a “backdrops”. To provide a clearer understanding of this approach, the Departmental Council now offers walking and cycling trails through one of the painter’s main sources of inspiration: the Loue Valley. There are eight different trails along which visitors can walk round the village of Flagey, over the Nahin bridge, one of the artist’s first painting subjects, and to the Mirror of Ornans, a lake that is also found in his work. These trails form an integral part of the “Pays de Courbet, Pays d’artiste” cultural project.

The “Pays de Courbet, Pays d’artiste” project also has an educational mission. The different venues also welcome schools and leisure activity centres from the department. Through guided tours and visual arts workshops, they can become familiar with artistic techniques through Gustave Courbet’s works and environment. In addition, with the aim of making culture available to audiences who are distanced from it, partnerships are developed every year with homes for the elderly or the disabled, social and employment integration organisations and, more widely, audiences who are distanced from culture for various reasons. Everyone can therefore learn about their local celebrity in their own way.

*Tenant farmers farmed the land in exchange for part of the harvest.

To paint a landscape,
you have to know it.
I know my region, I paint it.