Home > Welcome to Courbet country > Ornans and its surroundings 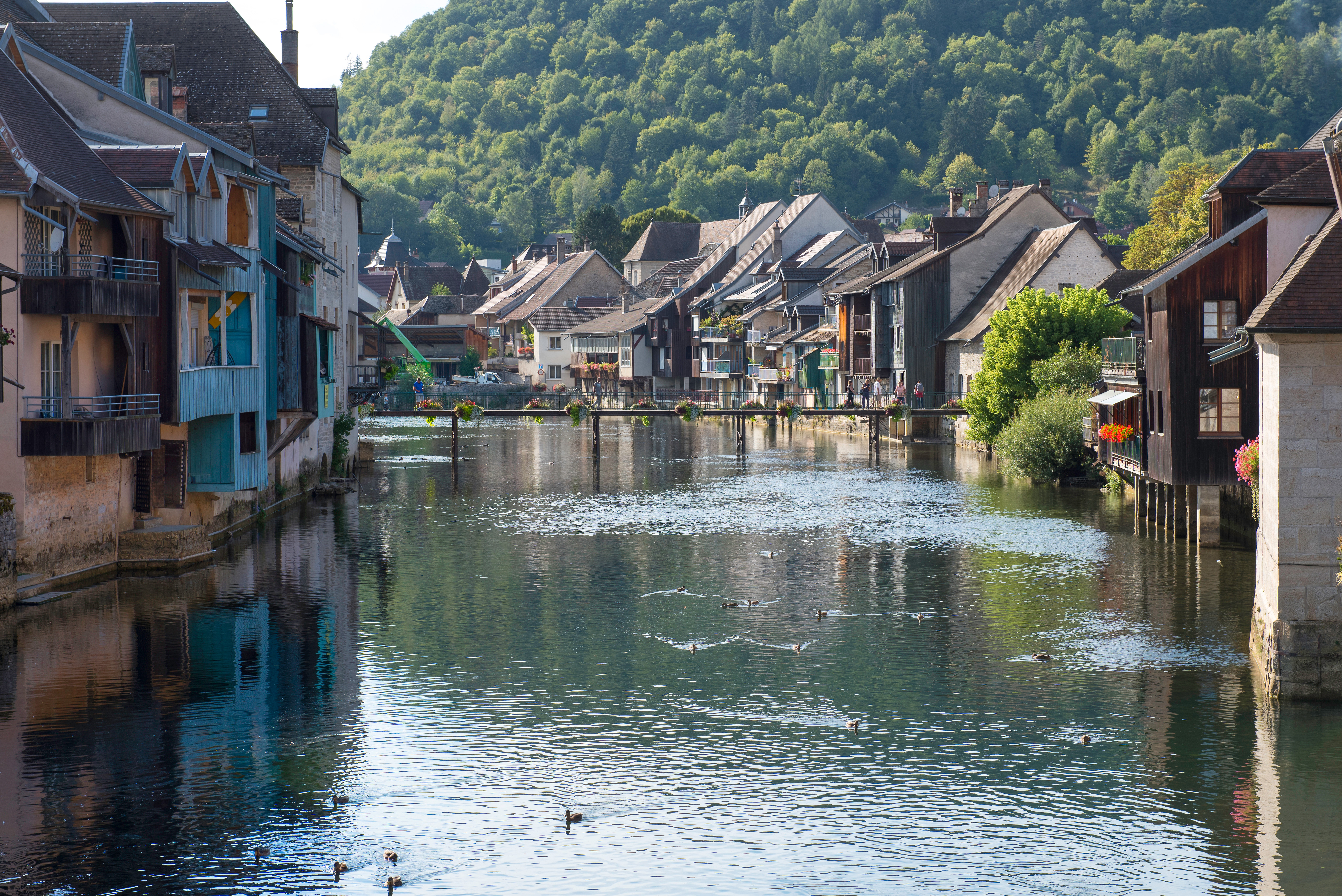 A combination of nature and culture around Ornans

Some people visit Ornans and its region because of its exciting natural environment with its kayaking, its unusual natural attractions and its fishing sites. Others prefer its towns and villages brimming with character, offering visitors an opportunity to immerse themselves in the region’s culture and heritage. Each year, thanks to the sheer richness of its landscapes and history, the Ornans area attracts many tourists from all around the world.

Ornans, the “Little Venice of Franche-Comté”

In addition to Gustave Courbet, Ornans is also the home town of Nicolas Perrenot de Granvelle, Charles V’s Chancellor in the 15th century and Pierre Vernier, who invented the measuring instrument named after him in the 16th century. Located just 30 minutes from Besançon, the town of Ornans offers visitors an exciting change of scenery with its “hanging” houses, its bridges and its private mansions dating back several centuries. This small town in Franche-Comté was entirely laid out around its river, the Loue, which has earned it the nickname of the “Little Venice of Franche-Comté”.

Beginning with Place Gustave Courbet and its lime trees, this trail proposes a walk through the narrow streets of Ornans to discover its private villas and mansions, including the Hôtel Beauquier-Doney dating from the 15th century, its octagonal tower and its gate from the 18th century. After having admired the finest view across the town from the footbridge, walkers can then visit the church of Saint-Laurent and continue their tour via the Nahin bridge and its anchor-shaped fountain dating from the early 17th century.

Fans of Gustave Courbet can also go and admire the Mirror of the Loue, a lake created by a dam, which inspired him in 1872 to paint The Reflection of Ornans (around 1872, Ornans, Musée Gustave Courbet, National Museums – Recoveries Register (MNR 181)). Nearby, on the other side of the river, we find his last studio. Finally, after visiting the museum devoted to him, you can pay a final tribute to him at the town’s cemetery, located on the outskirts of Ornans heading towards Chantrans. The 13 stages of this trail are presented in a leaflet available in four languages, which you can obtain from the tourist office.

The Church of Saint-Laurent in Ornans

Its spire is 57 metres high and the first two floors are those from the 12th century Romanesque church. The upper part dates from 1735 and above this we find a dome topped with a lantern and a shaft. Two chapels were added to the choir in the 18th century.

This church has a large amount of 17th-century church furniture produced by the sculptor Jean Gauthier d’Ornans. It also contains the tomb of Pierre Perrenot, who died in 1537, father of Nicolas Perrenot de Granvelle.

Overlooking the town, the rocky site where the castle was located offers an unimpeded view over the surrounding natural environment. This spot was first and foremost a strategic lookout point enabling Charles the Bold to watch over the “salt road” in the 15th century. In the 16th century, the castle was managed by the mathematician Pierre Vernier who produced his “Quadrant nouveau” there, of which one application went on to become the well-known “Vernier” calliper scale, much loved by mechanics and toolmakers.

In the 17th century, during the second conquest of Franche-Comté and on the orders of Louis XIV, the castle of Ornans was destroyed. All that remains today is the chapel dating from 1289 dedicated to Saint Georges, surrounded by a few ruins covered by vegetation and a small hamlet.

Located 10 km from Ornans, this small village is the perfect place to stop off to admire the Loue Valley. In addition to a former 14th century chapel converted into a church and a former 17th-century clergy house, Cléron is home to a castle built in 1320 by Humbert de Cléron, vassal of the Count of Burgundy, to protect the ford on the Loue, on Franche-Comté’s main salt road. Extended over the centuries, it still has its mediaeval fortifications.

Along the road to the “Source of the Loue”

As you criss-cross the Loue Valley heading towards Ouhans and its source, walkers pass through several villages which deserve a visit including Lods. With its wine and wine-making museum and its winegrowers’ houses dating from the 16th and 17th centuries, this village alongside the Loue has been awarded the “Plus Beau Village de France” label (Finest village in France).

Finally, downstream from the Source of the Loue, visitors can take the time to enjoy a stroll in Mouthier Haute-Pierre, which is today famous for its kirsch and its majestic landscapes surrounding the picturesque houses, courtyards and architectural features, along the narrow streets.

A winding road takes the visitor through a leafy natural environment to Nans sous Sainte-Anne and the Source of the Lison, another “must see” natural site. A little further on, fans of unusual attractions can cross the Pont du Diable (Devil’s Bridge) in Crouzet-Migette. Built between 1875 and 1880, spanning a major canyon, its construction is the subject of a famous local legend. The entrepreneur Babet experienced serious difficulties in building a bridge over the ravine overlooking a waterfall of almost 25 metres. Each night the bridge collapsed, but the Devil, who was keeping a careful watch, offered to make the bridge stable in return for the businessman’s soul and that of the first person to cross the bridge. But the first person across was the parish priest, who raised his ciborium and drove the Devil to the bottom of the ravine, never more to be seen…