Home > Welcome to Courbet country > Who is Gustave Courbet? 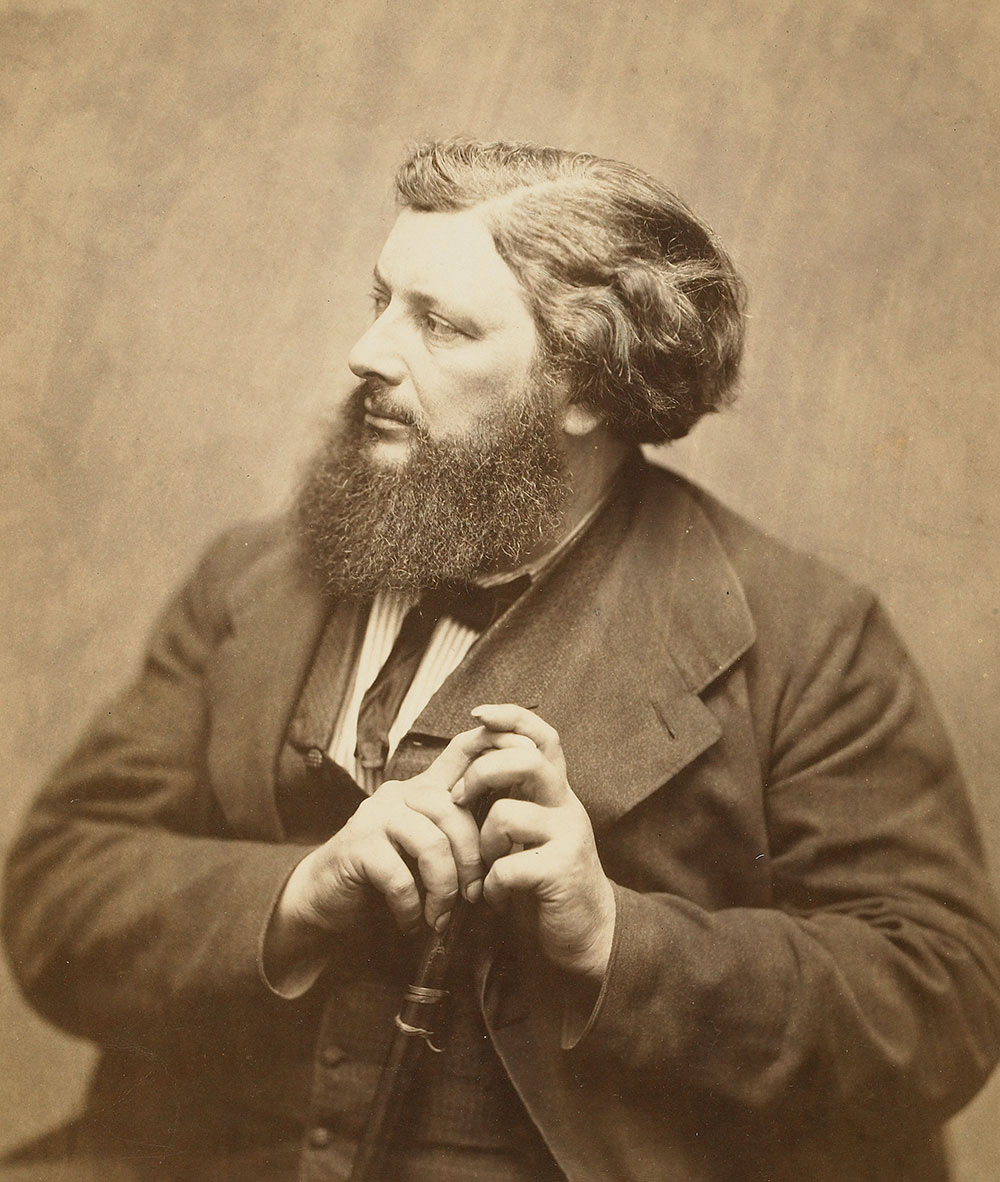 Gustave Courbet’s arrival on the French art scene challenged conventions which had been well entrenched in the world of painting for several centuries. Despite the rules imposed on artists by the Académie des Beaux-Arts, other artistic movements flourished in the 19th century, including Romanticism with for example The Raft of the Medusa by Théodore Géricault in 1819 (Paris, Louvre Museum). Courbet’s objective of reforming painting led him to launch a new artistic movement: Realism.

Throughout his life, he surprised and sometimes shocked the art world, its representatives and its supporters with his new approach to viewing the world and society.

His early years in Ornans

Gustave Courbet was born in Ornans into a comfortably-off family to whom he remained close throughout his life, as shown by the many portraits of family members, sometimes even featuring them within some of his major works. At the age of 14, he began studying at the town’s seminary, where he received a grounding in the novel artistic education proposed by Claude-Antoine Beau, who took his students outdoors to draw in the open air. It was in this context that he produced his first works, landscapes of the Franche-Comté region including The Bridge at Nahin (Ornans, Musée Courbet), which he produced in 1837. And so it was that until the age of 20, Gustave Courbet lived in Doubs, in a region he particularly loved and which served as the backdrop for many of his works.

His first steps in Paris

Gustave Courbet arrived in Paris in 1839 to study law, in line with his father’s wishes. However, he quickly rejected this future career path. Like many budding artists, he regularly visited the Louvre to make copies of great works such as for example The Vision of Saint Jerome by Guercino (Ornans, musée Courbet). It was in Paris that he had an opportunity to admire the great names in Romantic painting such as Eugène Delacroix and his large-size pictures relating stories from contemporary history.

In Paris, he forged strong relationships with some of the leading intellectuals of the day, including the poet Charles Baudelaire. In 1848, during the revolutionary climate which led to the creation of the Second Republic, Courbet discovered Proudhon’s socially-committed ideas. With Charles Baudelaire and the art critic Champfleury, they together published a newspaper, Le Salut Public, which featured some of Courbet’s drawings.

After being refused several times, Courbet was accepted for the first time in 1844 for Le Salon, the official annual exhibition organised by the Académie des Beaux-Arts, with Self-portrait with a Black Dog (Paris, Petit Palais). In 1848, he presented around 10 paintings and the following year, After Dinner at Ornans (Lille, Palais des Beaux-Arts) was awarded a medal. Courbet now enjoyed public recognition and was finally accepted by the art world.

The man behind the scandal

However, with The Stone Breakers (destroyed) produced in 1849 and with Burial at Ornans (Paris, Musée d’Orsay) exhibited in 1850-1851, Courbet encountered the incomprehension and even hostility of the public and of his peers. He had chosen to use the large format traditionally reserved for religious, mythological or historical scenes to portray the daily life of the people. This novel approach to painting caused a scandal and profoundly challenged artistic conventions.

Despite this controversy, Courbet regularly exhibited at Le Salon. During the 1855 exhibition, more than ten of his paintings were accepted but The Painter’s Studio (Paris, Musée d’Orsay) was refused because of its large size (3.61 m x 5.98 m). Courbet then decided to organise his own personal exhibition, which he financed and which he called “Le pavillon du Réalisme”. This was one of the founding moments of the realist movement.

Courbet achieved international recognition from the early 1850s onwards. He met Alfred Bruyas, a rich collector from Montpellier, who became his sponsor, thereby enabling him to paint prolifically and in total liberty. He was exhibited in Brussels, Berlin and Vienna. His painting was extended to embrace new subjects such as hunting scenes, like Killing a Deer (1867, Besançon, Musée des Beaux-arts et d’Archéologie), and female nudes, with for example, The Sleepers (1866, Paris, Petit-Palais).

Taking his place in the art world

He travelled, both in France and abroad. In addition to his very frequent visits to Ornans, somewhere he always remained strongly attached to, even going as far as building a studio there in 1858, he stayed in Normandy several times where he worked alongside Eugène Boudin and Claude Monet.

From this point on, Courbet took his place in the art world and built up a circle of fans, collectors and loyal advocates. Despite this, he continued to challenge religious morality and traditions with for example Venus and Psyche (1864, destroyed), which was refused at Le Salon for indecency. It was at this time that he painted The Origin of the World (1866, Paris, Musée d’Orsay) for a Turkish diplomat, Khalil Bey. The general public were unaware of this painting’s existence until 1995.

Although Courbet had long supported republican ideas, it was during the events of the Paris Commune in 1871 that he fully expressed his political commitment. Following the defeat by Prussia in 1870 , the people of Paris decided to set up a free “Commune” in Paris, fully independent of the French government. During the Commune, Courbet was elected as a municipal councillor but also as president of the artists’ federation, the equivalent of a minister of culture today.

His involvement in the Commune and the unfounded accusation that he participated in the destruction of the Vendôme column saw him jailed in 1871. He continued to paint, particularly still life scenes such as Fleurs (1871, Ornans, Musée Courbet), and portrayed himself in a striking self-portrait, Self-portrait at Sainte-Pélagie (1872, Ornans, Musée Courbet). After this initial spell in jail he was once again judged in 1873 and ordered to pay a fine to finance the reconstruction of the Vendôme column. As he was unable to pay it, he risked being jailed once again.

To escape this fate, he chose exile in Switzerland, where he spent the last years of his life. Ill and exhausted, he painted striking landscape pictures to repay his debts, after the seizure of his assets in France. He also became active as a sculptor with emblematic works expressing his quest for freedom including Woman with a Seagull (1876, Ornans, Musée Courbet).

Hoping until the end that he would be pardoned and finally allowed to return to France, he passed away on 31 December 1877 at La-Tour-de-Peilz (Switzerland).